The major theme of the film is that, due to cultural assumptions, people of different types are still unable to communicate with each other.

At the same time, the movie attempts to highlight behavior that is ubiquitous across all cultures, such as a man worrying over his wife, a woman taking care of children, young boys trying to better each other, and teenagers trying to catch the attention of the opposite sex.

Cultural assumptions and suspicions held against them prevent understanding, revealing the struggles with communication inherent in the human condition.

this is one of the movies that I have to check all those IMDB, rottentomatoes and wikipedia in order to get a better understanding of its main theme. Quite agree with the quoted comment "unable to communicate with each other".

For me, in the first part it resembled "Crash" in the way that they all mentioned 'bout those seperate-but-somehow-related shades of life. But that didn't impress me much as the stories in Babel were kinda loosely connected. And I felt more and more interested in the story of the mute-deaf Japanese gal.

When i was a lil bit younger (than now), I usually thought that those who wear sexy clothes are sluts. Now I still have that mindset but not as strict as it used to be, though. Tend to think 'bout it in another way. To dress like a bitch or to do some crazy, abnormal thing might just be their last ways to express what they can't let others to understand 'bout them. In another word, it might just mean "i'm fuking lonely rite now", maybe

The Jap gal in Babel was deaf and mute. Her mom committed a controversial suicide and she didn't get along well with her dad. The girl then did all kind of naughty things like using drugs, going out panti-less, exposing her "hairy-monster" (really like this comparison :D) to other boys, getting nude and asking others to 'touch' her. All of those just meant one thing : she really needs others to notice her, to think 'bout her not as a deaf and mute one, not to think 'bout her the way her dad did.

I really like the scenes where the boys gave her some drugs (ecstasy ?) and wine. they took it and had a really fun day. I'm pretty sure that you might interpret this as they had an orgy or something like that if you didn't watch the movie but just read my lines. However they were just hanging out and did all those childish games in the park or by the water fountain, just that. In the real life, it would be hard to control urself after taking those pills but just take it as what it was in the movie leh.

Again, my favourite saying : "let us be silly and free". I always love to watch the scenes where the youngsters hang out and do all the stupid things with each other. I like Stephen Chow movies also because of that. No matter who they are, gangsters, thugs or ordinary ppl, they still got a long-lasting and meaningful relationship (friendship, lovers, fatherhood) there. And it was all expressed not by those lua`-tinh`-se'n-lo.n scenes but just some simple and even humorous ones. But I still feel the whole emotion there. Like it the way it is

The first time I watched Battle Royal, i thought "oh fuk, what a sick film. those sicko japanese did it again". But my bro (who is living in Japan) told me that i would understand the movie better if I lived there. He said the movie reflects the real Japanese society, the pressure that one got to have/to bear in order to strive for the best if they don't want to be just another loser. After a while I think I understand the movie a lil bit and it's not really sicko anymore.

More and more I comment 'bout some stuffs, I realize that I shouldn't do it at the first place. Cause it just changes according to how much I know 'bout those. hi`.

In many reviews I read, they said the Jap actress should get an Oscar for the best supporting role. I second that. Just fuking love her facial expression. And wonder if I saw myself there ? Or anybody who once fell into an endless circle of loneliness, when u just want to do any stupid thing that u can think of just to let others know what u feel. U might see that in the girl.

The final scene is not really new yet still touching. The gal stood at the balcony, being naked. And her dad came to hold her tight. She did, too. The father might not be able to communicate or to share with his daughter, and the gal might not be able to let her father know what she actually felt, but after all, they still belong to the same family, and it's the most important thing. Once u have nothing left, for the girl, when she just got nothing in her mind, on her body, that was when she realized that she still has, and always can find a shelter from her dad. That's what a dad supposed to be, always. 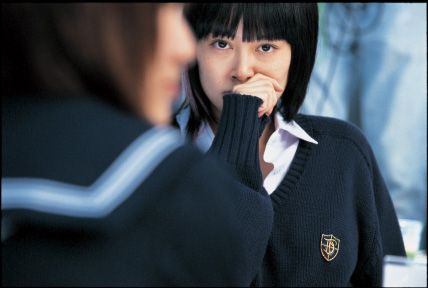